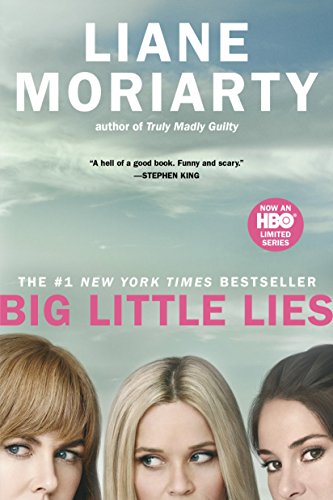 Let me start by saying I actually gasped and said, “Oh. My. Gosh.” loud enough to wake up my husband while reading this book.  In true Moriarty fashion, this book is told from multiple points of view where the characters each have their own story line that overlaps into the overall story line.  There is a murder at a school event and throughout the story you are listening to testimony given to police mixed with the backstory of each of the key characters and their families.  These backstories keep you guessing as to who killed who throughout the entire book.  There are multiple motives and lots of turmoil with which to develop theories.

Celeste- The woman who seems to have it all.  A successful lawyer turned stay-at-home mom married to a good looking man who is openly affectionate and passionate about his wife.  They have adorable twins who are starting kindergarten, and they are viewed as the perfect little family.  However, is life for Celeste really as it seems?  What goes on behind closed doors?

Madeline- A strong willed woman with an amazing ability to hold a grudge.  She is currently married to Ed with whom she has two children.  However, they have also raised Abigail her daughter from her previous marriage to Nathan.  Life is in a bit of an uproar as her daughter, Chloe is starting kindergarten with Skye, Nathan’s daughter with his new wife Bonnie.  To top it all off, Abigail seems to be choosing Nathan over Madeline which feels like the ultimate betrayal.

Jane- New to town, this single mother finds herself quickly dropped in the middle of drama.  As Ziggy starts kindergarten, he is accused of bullying Amabella, a little girl in his class.  When he denies the allegations, Jane is left wondering what to believe.  She wants to believe he is telling the truth and has no reason to doubt him.  However, given her dark past with his father, she is left wondering what he may really be capable of doing.  Luckily for Jane, she is quickly taken in by Celeste and Madeline so this isn’t a battle she is forced to fight alone.

Renata- When her daughter is bullied at school she is determined to find justice and put an end to it for good.  When Amabella accuses Ziggy of the bullying, lines are drawn and teams are formed as to who to support.

With all this drama, is it any wonder things end in disaster?  This book had me hooked from the beginning.  It was a page turner and a sleep thief.  I could not put it down until I knew exactly what happened.  I found myself caring deeply for the characters.  I was easily able to empathize with them.  While the situation is a bit outrageous, the characters were so well written and the story so well crafted that it all seemed completely believable.  This is on my list of books to always recommend when asked.  Definitely in my top two Moriarty books, this earns 5+ for sure.

On a side note, this was also developed into an HBO miniseries.  While I will say it was very well done, and they stayed true to the characters for the most part, the book is always better.  Putting this book into seven hours was nearly impossible.  Even if you watched the show, the book will still pull you in and keep you entertained.